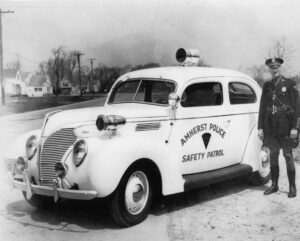 In 1819, Timothy S. Hopkins was elected the first supervisor for the Town of Amherst. He appointed two Constables, Joseph Hershey and Palmer Cleveland. These two men patrolled the present boundaries of Amherst as well as portions of Cheektowaga, by 1883, the number of the Town Constables had been increased to five.

The Village of Williamsville was served by Town Constables until it was Incorporated in 1850. Early records show that no Constables appeared on the election ballots until late in the 19th century. Then, when speeders became a problem in 1918, the Village Trustees hired two men, W. Carlton Baker and Jewett Hoffman, whose only duties were to arrest speeders

In 1920, the Town and Village began the practice of hiring special police officers. In June of that year, Mr. Edwin Evans, a former State Trooper, was appointed in Williamsville. Charles Albert, Howard F. Voelpel and Hubert Daniels were appointed to the Town post.

In 1924, the Town of Amherst Police and the Village of Williamsville Police merged. Officer Speich was appointed to the Amherst Police and Mr. Maving was rehired. Then Town Supervisor, Mr. Wehrle, appointed Edwin Evans Chief of Police, a position he held until 1956. By 1938, the Department had grown to thirteen men.

In January 1989, John B. Askey was appointed Chief of Police and served in that capacity for 10 years. His goals included maintaining the community’s status as one of the safest in the nation and sustaining the police department’s reputation as one of the nation’s finest.

In July 1999, John Moslow was appointed as Chief of Police and served in that capacity for eight years. During his tenure, Chief Moslow focused on developing effective partnerships with school officials and fostering a personal and responsive relationship with various community/neighborhood organizations to maintain the town’s high ranking as one of the safest communities in the country. Advancing law enforcement information and tactical technology was also prioritized. 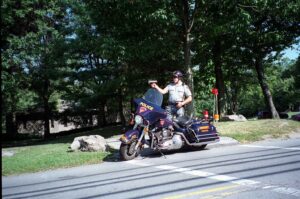 During a challenging budgetary era, Chief Moslow established the Amherst Police Foundation to help augment the department with his vision of leading the region with cutting edge technology. Chief Moslow also proudly represented the region’s local law enforcement community and the Town of Amherst in April 2004, when asked to participate on a presidential forum with President George W. Bush and other federal officials to address and promote the effects of the Patriot Act with regard to our nation’s fight against terrorism.